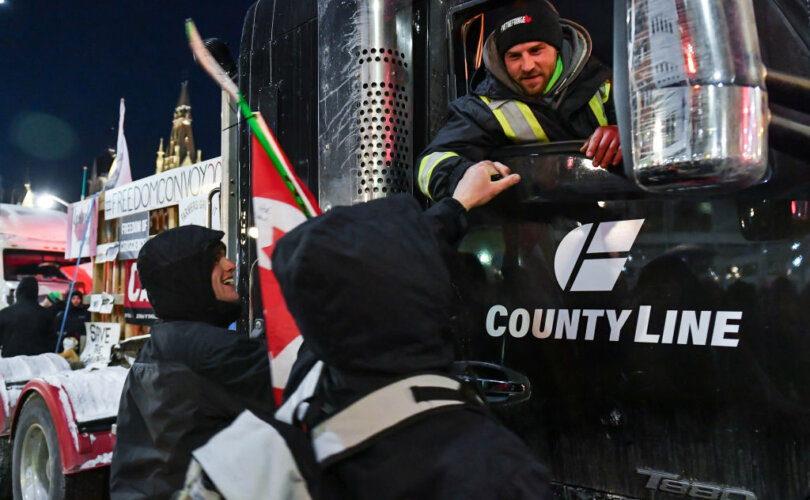 OTTAWA, Ontario (JCCF) – The Justice Centre has become aware that Ottawa police are seizing fuel that individuals want to donate to truckers who are part of the Freedom Convoy, and there are reports of truckers having been arrested.

“It is winter in Canada. Protesting publicly in freezing temperatures requires the truckers to have fuel to stay warm. Confiscation of fuel jeopardizes the personal safety of the peaceful protesters,” stated lawyer Jay Cameron, Litigation Director at the Justice Centre.

Section 2(c) of the Canadian Charter of Rights and Freedoms protects the right of all Canadians to gather and protest peacefully against (or in favour of) government laws and policies.

Ottawa Police Chief Peter Sloly has stated publicly that the truckers have been peaceful, and have not caused any harm to Ottawa residents. Provided that the truckers are peaceful, their protest in a public place is expressly protected by the Charter.

In one video, it appears that Ottawa police are justifying their seizure of fuel by claiming that the peacefully protesting truckers are violating the Criminal Code, in particular section 430 which makes it illegal to destroy or damage property.

Described as the crime of “mischief,” section 430 also makes it illegal to interfere with the lawful use and enjoyment of property, and illegal to obstruct people when they legally use and enjoy property.

The video features a claim, apparently made by an Ottawa police officer, that the truckers are violating the Criminal Code, and that anyone bringing fuel to these truckers is therefore facilitating criminal activity, which therefore justifies police taking the fuel “as evidence,” according to the officer in the video.

“The Ottawa police seem to be rebranding the exercise of the Charter freedoms of expression, association, and peaceful assembly as criminal mischief under section 430 of the Criminal Code,” noted lawyer Nicholas Wansbutter, counsel for the Justice Centre.

“The truckers in Ottawa have gathered in Ottawa to peacefully protest government lockdowns and vaccine mandates,” Cameron added. “Many reports indicate that the vast majority of the protesters have been peaceful and law abiding. The truckers are not obstructing people from moving about the city.”

Cameron added that “Ottawa police have the right to ticket people, including truckers, over seatbelt violations, illegal parking, and other traffic infractions.”

“However, it is misleading and deceptive to label a peaceful protest in the nation’s capital as a criminal offence,” he noted.

“The Justice Centre is deeply concerned about the attempt by some federal, provincial and municipal politicians, as well as the Ottawa Chief of Police, to label the peaceful truckers Freedom Convoy as a violation of the Criminal Code.”

Meanwhile Wansbutter described the police confiscation of fuel as “an illegal seizure in a context where no crimes are being committed, and no charges were laid against truckers or anyone else.”

Since launching our petition in support of the Freedom Convoy truckers less than one week ago, we've managed to obtain more than 65,000 signatures from freedom-loving people in every corner of the world!

This is an excellent show of support for the international cause of freedom from intrusive medical mandates, but Canada's truckers still find themselves a foremost target of their government, at both the federal and, now, local levels.

In fact, Mayor Jim Watson has even instituted an entirely unnecessary and politically-motivated "state of emergency" in Ottawa simply due to the truckers' presence there.

So if you haven't already, please SIGN this important petition, which calls on Prime Minister Trudeau and his pro-mandate allies to acknowledge the medical autonomy of working people by reversing course in the federal strategy to combat Covid.

If you have already signed this petition, please consider SHARING it on any of the following social media platforms by clicking on their respective links:


Thank you for being a voice for freedom and medical autonomy!

Canadian truckers are fighting back against Justin Trudeau's Covid overreach and medical tyranny, and are giving people across the country -- and the world -- a new voice for freedom!

These truckers, like millions of other Canadians, have been subjected to unprecedented medical coercion, manipulation, and intimidation on behalf of Trudeau's liberal government, and, with their livelihoods on the line, they have risen to meet the moment by bringing their cause directly to Ottawa in the form of a massive Freedom Convoy!

But, unsurprisingly, they are still being met with resistance by extreme politicians who wish to exercise complete control over these truckers' -- and all Canadians' -- medical autonomy, which is why we're asking you to show your support for these brave, hardworking men and women by adding your name and your voice to their cause.

Please SIGN and SHARE this petition to Prime Minister Justin Trudeau asking him to back off these truckers, change course in his approach to Covid, and support the medical autonomy of the truckers and all working Canadians going forward.

Like millions of Canadian workers across the country, truckers are being required by Justin Trudeau's Liberal government to get the experimental Covid-19 vaccine, or face a 14-day quarantine period if and when they cross the border into the United States to make their deliveries.

These truckers were categorized as "essential workers" (which they most certainly are) during the worst days of the Covid crisis, when lockdowns were the universal norm and millions of people were forced out of their jobs and offices. Even so, they remained on the job through it all, ensuring that essentials were available to people in every corner of the country, even when some businesses were shut down and strict rules were in place that made something as simple as grocery shopping a challenge for millions.

In fact, Prime Minister Trudeau went out of his way to compliment these men and women back in March of 2020, tweeting the following:

While many of us are working from home, there are others who aren’t able to do that - like the truck drivers who are working day and night to make sure our shelves are stocked. So when you can, please #ThankATrucker for everything they’re doing and help them however you can.

In fact, But just yesterday, Trudeau went on the record at a press conference labeling these truckers everything from "racists" to "Nazis" in a simply stunning reversal from his earlier comments.

So why the sudden change in attitude from the Prime Minister?

Because, as it turns out, these truckers are refusing to sit idly by while their rights -- and the rights of millions of working Canadians -- remain under attack like never before, and they are standing up to Trudeau and challenging his government's radical medical tyranny head-on.

With their livelihoods on the line, these truckers decided it was time to take action.

This past weekend, the #FreedomConvoy led a 50-mile-long caravan of what's estimated to be thousands of truckers from across Canada to Parliament Hill in Ottawa, where they staged a monumental demonstration to protest Trudeau's vaccination mandate.

In addition, truckers from across the United States (who are similarly fighting to preserve their own medical freedoms against a power-hungry federal government) also joined the Freedom Convoy to stand in solidarity with their neighbors to the north.

This massive, now-international movement to restore the individual rights of these truckers and all working people after nearly two years' worth of lockdowns, mandates, and vast government overreach and infringement is taking Ottawa -- and all of Canada -- by storm.

Look no further than the trucker's GoFundMe, which has raised $10 million in support of their cause -- more than what was raised by either of Canada's two major political parties during the last financial quarter of 2021.

The grassroots are clearly on their side (and the side of freedom), but even so, Trudeau remains unmoved...

He has dismissed the truckers and their supporters as a "small fringe," and has even accused the organizers of the Freedom Convoy and its participants of holding "unacceptable views."

But Justin Trudeau is wrong: These hardworking men and women are not racists or Nazis, and they are certainly not a fringe group -- they are patriotic, freedom-loving Canadians who refuse to stand down when being faced with egregious medical tyranny on the federal government's part, and who are using their constitutional right(s) to freedom of speech and expression to be a unified voice for millions of others faced with similar medical mandates.

And they need our support.

This petition will be delivered, in person, to both Prime Minister Trudeau and the leaders of the Freedom Convoy.

Let's show Justin Trudeau, once and for all, that the desire to live and work freely is not just limited to a "small fringe," but rather the inherent right of ALL Canadians and their millions of backers from across the globe -- including YOU!

'Canada’s trucker convoy has shown the world it’s possible to push back against COVID tyranny':  https://www.lifesitenews.com/opinion/canadas-trucker-convoy-has-shown-the-world-its-possible-to-push-back-against-covid-tyranny/

“In my view, the truckers are not doing anything illegal by protesting peacefully against the 23 months of politicians restricting our Charter freedoms,” he said. “Citizens have every right to bring food, water, fuel, and other necessities of life in the winter to other Canadians, including truckers.”

Wansbutter observed how for “police seizures of fuel to be legal, the truckers themselves would have to be actively and knowingly committing an offence.”

“Only then could it be a crime to bring supplies to the truckers,” he said.

“Charging truckers with mischief under Criminal Code section 430 would be a serious overreach and a violation of citizens’ Charter freedoms of expression, association and peaceful assembly,” Wansbutter added.

Regarding Ottawa Mayor Jim Watson’s recent declaration of a state of emergency, the Justice Centre notes that the definition of “emergency” under the Emergency Management and Civil Protection Act is “a situation or an impending situation that constitutes a danger of major proportions that could result in serious harm to persons or substantial damage to property and that is caused by the forces of nature, a disease or other health risk, an accident or an act whether intentional or otherwise…”

“It is a serious stretch to say that peaceful protests in downtown Ottawa are a danger of major proportions, or that there is a real risk of serious harm,” Wansbutter declared.

“Emergency powers were never intended to prevent the citizens of a democratic country from expressing their displeasure with government overreach and mandates they believe to be unconstitutional.”

Reprinted with permission from the Justice Centre for Constitutional Freedoms