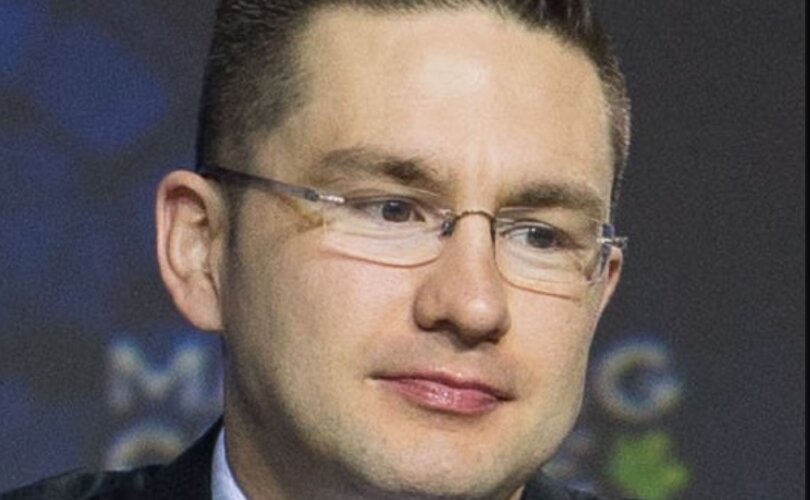 The party’s Deputy Leader, Candice Bergen, backed him up.

The Member of Parliament for Carleton, Ontario, Pierre Poilievre told the mainstream media that there is extreme bias in their reporting of the Canadian truckers’ “Freedom Convoy.” The convoy is heading to Ottawa to protest the Trudeau government’s dictatorial COVID jab mandates. In an expression of solidarity, Conservative Deputy Leader Candice Bergen publicly commended Poilievre and called out the Canadian media’s partisan slant herself.

“You know what I think is interesting, is that when there is a left-wing protest on Parliament Hill, we don’t see the liberal media going through every single name of the people who attends to try and find one person they can disparage the whole group with,” Poilievre told reporters outside the Parliament buildings on Thursday.

“Whenever you have five or ten thousand people who are part of any group, you’re bound to have a number who … say unacceptable things, and they should be individually responsible… but that doesn’t mean we disparage the thousands of law abiding and peaceful truckers, who quite frankly have kept all of you alive these last 2 years,” Poilievre continued.

When asked where he will be on Saturday, when the bulk of the protesters will be stationed in Ottawa, Poilievre stated bluntly, “I’ll be supporting the truckers.”

“Pierre Poilievre is right: When protests are advantageous for liberals and the media, nobody dares to question them; even Justin Trudeau broke public health guidelines to join them. But when the narrative doesn’t fit the left’s agenda, look out.”

Despite the protest travelling across the entire nation with no reports of any violent or criminal behavior, liberal news outlets like the Canadian Broadcasting Corporation (CBC) and the Globe and Mail newspaper, have been “warning” the public that “extremists” may be hidden among the protestors, going as far as to suggest that MPs in Ottawa may have their homes targeted.

However, the organizers of the protest have come out publicly to discourage any such behavior, emphasizing that the protest is to remain civil and within what is legally permissible.

“If you see participants along the way that are misbehaving, acting aggressively in any way or inciting any type of violence or hatred, please take down the truck number and their license plate number so that we can forward that to the police,” said convoy organizer Tamara Lich on Facebook.

“The only way that we are going to overcome this is through love and light, not hate and division,” she added.

“I think as Canadians, we’ve all seen enough of that. It’s time to move past that.”

— Article continues below Petition —
PETITION: STOP Medical Discrimination at the Ronald McDonald House!
Show Petition Text
17043 have signed the petition.
Let's get to 17500!
Thank you for signing this petition!
Add your signature:
Show Petition Text

Tell the Ronald McDonald House in British Columbia (BC) and Yukon to stop discriminating against families who do not wish to get the experimental COVID-19 vaccine!

It seems incredible -- like one of those click-bait headlines you see every day on shady websites.

But this is 100% real, and represents a terrifying new reality that families with sick children are facing without any rational or logical justification.

That's why we're asking you to SIGN and SHARE this crucial petition asking the Ronald McDonald House Charities leadership to STOP discriminating against the unvaccinated family members of sick children who need their support.

The Canadian Ronald McDonald House BC and Yukon, which provides housing for the families of sick children who are being treated in nearby hospitals, has sent letters to families ordering them to submit to the experimental COVID shots or to vacate the premises -- regardless of their children's needs.

On the organization's website, the Ronald McDonald House plainly states the following:  "All guests and visitors to the House must show proof of full vaccination against COVID-19. These measures in addition to an abundance of sanitizer and kindness will help us ensure the safety of everyone at the House."

But, of course, none of the measures suggested by the Ronald McDonald House, much less the COVID-19 vaccine, have been successful in stopping or even slowing the virus' transmission or reducing infection rates.

And with Pfizer's own CEO admitting just this week that the two COVID shots are not effective at preventing infection, it remains unclear what, exactly, the Ronald McDonald House means by "full vaccination."

Regardless, denying families housing during their child's hospital stay -- which is the primary mission of the Ronald McDonald House -- is not only a misguided discriminatory practice, it's stunningly cruel, and it must not continue going forward.

So please take a minute to SIGN and SHARE this important petition calling on Ronald McDonald House British Columbia and Yukon to stop discriminating against families based on their vaccination status.

These families need to focus on supporting their loved ones through very difficult medical situations and procedures, not get caught up the maddening politics of the COVID vaccine.

Whereas the Ronald McDonald Houses have historically been a refuge for needy families, they have now tragically succumbed to the mass formation psychosis over COVID taking Canada and the world by storm, and have decided to join in the unconscionable mass targeting of the unvaccinated to virtue-signal their way through these unprecedented times.

This is unacceptable -- particularly from an organization like the Ronald McDonald House -- and it must stop.

While the organizers of the convoy have advocated for a peaceful gathering to express their concerns with the Trudeau government, the Prime Minister himself has referred to the massive convoy as a “fringe minority” with “unacceptable views.”

Despite his avowal that the protestors heading to Ottawa are nothing more than a “fringe minority”, the triple-vaxxed Trudeau has gone into “isolation” as he claims he has been “exposed” to COVID-19, while admitting he has no symptoms and “tested negative.”

“Triple-vaccinated, not sick, feels fine, tests negative for the COVID virus, conveniently retreats home for the duration of a large protest in Ottawa against his policies,” mocked Ontario lawyer Ryan O’Connor.

“I think what he means is he’s scared of the truckers and has gone into hiding,” added ethics professor Dr. Julie Ponesse.

Regardless of Trudeau’s insistence on scapegoating, maligning, and discriminating against the unvaccinated, a growing body of data has indicated that vaccine mandates and passports have been a failed strategy for tackling COVID.

Many Canadians, both “vaccinated” and “unvaccinated,” consider such mandates a gross assault on individual freedoms. They also question why they should be deemed necessary, given COVID-19’s high survivability among most groups, its now understood minimal risk of asymptomatic spread, and research indicating that post-infection natural immunity is far superior to vaccine-induced immunity.